StopTech Cryo-Stop rotors for the Toyota Celica GT and GT-S are a cryogenically treated, smooth faced, premium rotor casting. They use the same premium rotor castings as a StopTech Powerslot slotted rotor but do not have the slots machined into them to help reduce costs. This rotor option is meant to offer a bridge the performance and price gap between basic replacement rotors and slotted performance rotors.

StopTech Cryo-Stop rotors are not designed or intended to outperform their slotted counterparts. Cryo-Stops are will outperform and outlast OEM replacements because they are a cryogenically treated, premium rotor casting. Cryogenic treatment is a one-time process in which the rotor is quickly cooled to -300F and then slowly brought back to ambient temperature. StopTechs cryogenic treatment process permanently changes metallurgy, resulting in a denser, stronger rotor able to withstand substantial braking forces for long periods of time; up to three times as long as an untreated equivalent rotor.

In addition to the cryogenic treatment Cryo-Stop rotors have an electrostatically applied finish designed to withstand 400 hours of saltwater exposure without rusting. This electrocoating (E-coating) finish, provides long lasting corrosion protection in the critical hat and cooling vane areas. So now your rotor will not only perform for a longer time, but they will look good longer too.

A different shop couldn't get this #BMW into spec

Some beautiful blue rides in the shop today. 2019

#M4 on the dyno for some impressive gains. Video c

New steering components and alignment on this beau

Some tasteful mods to this #q50 #redsport. Blacked

2019 #sti in for some installs and custom tuning #

Another before and after on these #wrx valves. 86k

#Audi #A3 in for an #accessport #intake #downpipe

Always a pleasure having @marco_wrx391 stop by for

Pulling the turbo out of this #sti for inspection.

Some nice asses in the shop today 😍

Switching over to your spring/summer wheel setup?

#subaru #wrx #sti in for some custom tuning. #ecsp

Almost ready to drop this beauty in 😍 #ecsperfo 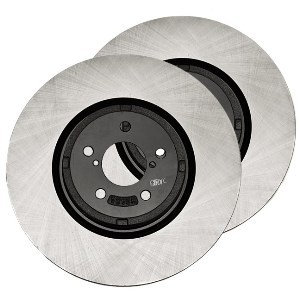