Stiffer transmission mounts give you a more connected feel with your car. The PERRIN Transmission mount kit will reduce most drivetrain movement, which efficiently transmits more power to the ground. This means more accurate launches during drag racing and Auto cross type events where you do not want drivetrain slop.

The PERRIN Transmission Mount uses custom made large diameter 70a Durometer polyurethane bushings which are pressed into CNC’ed aluminum mounts, held in place with large bolts and a thick steel base plate. The larger bushings allow the extreme vibrations and sounds to be absorbed, while keeping the transmission from severely moving around under extreme loads. Another feature the PERRIN Transmission mounts have a proper interlock built into it. The stock part is held together with bonded rubber and a couple of small tabs, which means it is possible that the OEM part could fail and leave your transmission disconnect from your chassis.

M4 in for a clutch replacement. 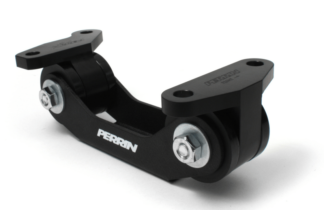