Kraftwerks is pleased to announce the release of a brand new intercooled supercharger system for the new Subaru BRZ and Scion FR-S. At the heart of the new system is the Rotrex C30-94, which is the same supercharger used in the extremely successful Kraftwerks 2006-2013 Honda Civic Si system.

At 9psi of boost pressure, the supercharger system produced an impressive +90whp on 91-octane through the OEM headers and exhaust, and +125whp on E85 through Skunk2 headers and exhaust. More impressive is the linear power curve throughout the entire power band due to the patented traction drive technology, which transmits power through friction forces between its rolling elements.

Independent Drive System
 Does not share belt with engine accessories for greater reliability
 If the drive belt breaks, you wont be left stranded
 Allows for more flexible offset supercharger placement

Offset Supercharger Placement
 Allows for greater clearance around belts, thus reducing chances for rubbing
 Allows for simple and more efficient tubing layout
 No poorly designed, inefficient and goofy-looking custom hoses/tubing into the throttle body
 Allows for a single shot from the cold air intake section of the front bumper

Ease of Installation and Tuning
 Simple bolt-on installation. No cutting, drilling, or welding
 8 hours installation time (approximate)
 Kits sold with or without tuning

@aprllc #stage1 on another #GLI. If you own an Aud

Coilovers, sway bars, and end links to freshen up

We loved having this @cadillac #atsv on the dyno t

Valve cover and gasket replacement on a #G35. @pah

Lower downpipes and a catback exhaust on a 2018 #i

Some @aprllc stage one flashes 👍

We want to see more #Bajas! Always a treat when th

A different shop couldn't get this #BMW into spec 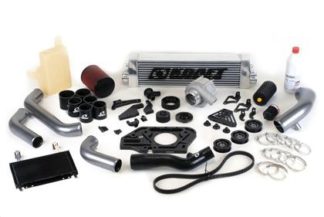