Kraftwerks is pleased to announce the release of a brand new intercooled supercharger system for the new Subaru BRZ and Scion FR-S. At the heart of the new system is the Rotrex C30-94, which is the same supercharger used in the extremely successful Kraftwerks 2006-2013 Honda Civic Si system.

At 9psi of boost pressure, the supercharger system produced an impressive +90whp on 91-octane through the OEM headers and exhaust, and +125whp on E85 through Skunk2 headers and exhaust. More impressive is the linear power curve throughout the entire power band due to the patented traction drive technology, which transmits power through friction forces between its rolling elements.

No poorly designed, inefficient and goofy-looking custom hoses/tubing into the throttle body

Lower intake air temperatures than all other systems

EASE OF INSTALLATION AND TUNING 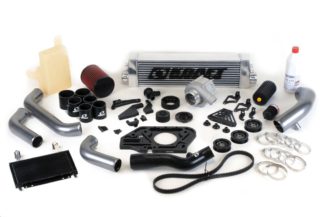