Your FR-S factory crank pulley is responsible for transferring energy from your crankshaft to your water pump, a/c compressor and alternator. It does this by way of a rubber belt and it does it’s job well. The drawback to the factory pulley is that it’s quite heavy. Reasons for this include less expensive manufacturing and using the pulley’s mass to smooth out ‘noise’ in the accessory system (NOT to be confused with functioning as a harmonic dampener, which it does not). The GrimmSpeed Lightweight Crank Pulley reduces the rotational mass of the system, allowing your engine to accelerate and decelerate the rotating assembly more quickly.

Design
The design process for this pulley ensured that a perfect factory replacement fitment was maintained while performance was maximized. It’s a common misconception that the mass of a crank pulley alone determines its effectiveness. The truth is that it’s actually the moment of inertia that affects the pulley’s ability to improve engine and throttle response. The moment of inertia, in non-engineering terms, is a function of not only the mass of an object, but how that mass is distributed about it’s rotational axis. A lower moment of inertia means that less torque is required to spin the crank pulley and, in turn, the crankshaft/engine. Our engineers took great care to keep the already minimal mass as close to the center of the pulley as possible without sacrificing its strength.

The result is a pulley that fits well, looks beautiful and works exactly as intended. From the first test drive, you’ll notice smoother operation, faster response and a more enjoyable drive. Much of this is difficult to quantify, but you can see from the datalogs below that when compared to the OEM pulley, the GrimmSpeed Crank Pulley quantitatively improved throttle response.

The start of something beautiful. Pulled out this

We still have a couple open spots for @cobbtuning

#unlocking and #ecu so we can write a custom #tune

Did you know we're also a licensed used car dealer

#sti on the lift for new carbon ceramic pads and r

I know how much you all love a good burble tune. H

A little over 20whp gained in tuning from this #po

On the dyno for some more custom tuning. We love o

This #evo came in for a custom tune and we quickly 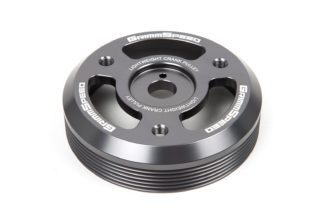