The Gates Replacement Timing Belt Component Kits for the WRX and STI is complete set of components needed for replacing the timing belt, water pump and pulleys. Gates has assembled a kit including the pieces that are commonly replaced during routine maintenance or when doing an engine swap: Four pulleys (A, B, C x 2), belt tensioner (D), water pump (E), and a timing belt (F). Gates manufacturers all of the included components to OEM quality standards, so you know they will perform for a long time. The Gates pulleys are also available individually, below, and the water pump can be purchased separately, here.

If you are looking for even more performance, go with a kit that includes the Gates Racing timing belt. 300% stronger than a stock belt and featuring three times the heat resistance over standard rubber belts under high-load conditions, the racing belt is optimum for high horsepower builds or those looking for maximum longevity.

M4 in for a clutch replacement. 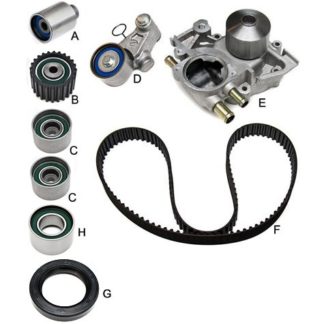