The Stage 2 Power Package for the Mustang EcoBoost is the best second level for the Ecoboost powered vehicle. During exhaustive testing, the COBB engineers found that heat, not necessarily airflow, was the biggest restriction to power on the platform. As such, they married a larger Front Mount Intercooler to our 3″ mandrel bent aluminum intake kit. This setup cools temps as much as 100 degrees, and produces significant power. Everything is tuned right out of the box with the Accessport and pre-installed maps!

Want to make a huge improvement to your Mustang EcoBoost without changing the exhaust note? The Mustang EcoBoost Stage 2 Power Package is the ticket! Stage 2 upgrades your FMIC, Intake, and adds a tune. These parts deliver an aggressive, but safe calibration, consistent power delivery from charge air cooling, and enhanced sensory feedback from the turbo and bypass valve through the intake.

Compatible with Accessport Off The Shelf Maps 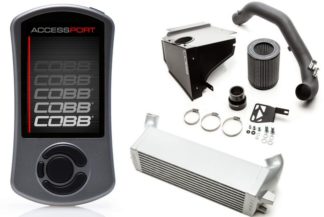