ACT’s SFI certified Heavy Duty 4-Puck Clutch Kit for the Mitsubishi EVO 8 + 9 friction surfaces were designed for highly modified, track driven cars. ACT offers a sprung 4-puck disc (G4) and a solid 4-puck disc (R4). The ACT G4 has very harsh engagement and is designed for road race cars only. ACT’s G4 friction surface has good durability and spline life characteristics under normal use. The sprung hub helps to reduce driveline shock and be relatively quiet compared to an unsprung hub but will definitely have chatter.

The biggest benefit of the ACT 4-Puck Solid Hub Race Disc is it enables extremely fast shifts thanks, in part, to its reduced inertia. An ACT R4 race disc friction surface has good durability but will have shortened spline life. ACT designed the R4 for a heavily modified drag race or road race cars where extremely harsh engagement and clutch chatter is expected.

Both the G4 and the R4 are available coupled to the Heavy Duty pressure plate for a 41% increase in clamp load, or the Xtreme pressure plate which increases the clamp load by 57%. The HDG4 is the most streetable 4-Puck combination (but not suggested for any vehicle that is daily driven) while the XTR4 is not streetable and only recommended for track applications.

#mitsubishi #evo engine getting ready to be droppe

Carbon cleaning on a #GTI today. Keeping your valv

Custom engine and transmission tuning on this beau

If you're wearing headphones, consider this your w

A nice #WRX engine build about to be dropped in. #

Having some fun with a #typeR the next few days #e

@cobbtuning over here making us blush ☺️. Than

Lots of calls asking if we're open, we absolutely

@slaaaacks came in for a downpipe and cold air int

#turbomiata in for some custom exhaust work. 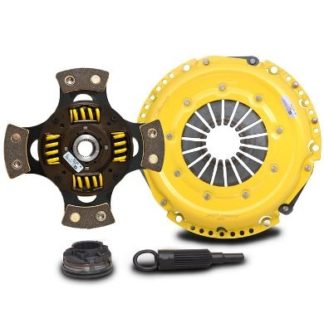